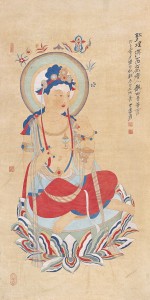 This Sunday November 29, 2015 at our normal Sunday Evening Zazen and once a month thereafter we will chant the 16 Bodhisattva Precepts.

The sixteen bodhisattva precepts are a set of vows of ethical conduct taken many times in a Zen practitioner’s life. They derive originally from the vinaya, monastic vows taken on ordination during the Buddha’s time (250 precepts for monks, 348 for nuns). Lay people took only the first five vows, known as Jukai- Five Precepts. The bodhisattva precepts used in the Mahayana tradition emphasize conduct to benefit others, and are taken by both monastic and lay practitioners. The short set of sixteen precepts used in the Soto tradition were formulated by Dogen Zenji, the founder of Soto Zen in Japan. They form the basis of several ceremonies: jukai (receiving the precepts), priest ordination, marriage and funeral rites. Many Zen centers chant the precepts once a month on the full moon, in a ceremony of reflection, repentance and renewal.

The precepts are inexhaustible mindfulness practices. They are also lifetime koans. These sixteen bodhisattva precepts are warm and down-to-earth, but also spacious and insightful. They help us to apply the vivid moment-to-moment awareness of our zazen practice in our daily life of work, family and relationships.